Museum Serves as a Reminder of Dirty War in Chile


The death earlier this month of Gen. Manuel Contreras, a notorious secret-police boss and unrepentant human rights abuser, coupled with legal developments in a number of decades-old criminal cases, have shed new light on the dark and still haunting legacy of the dictatorship of Chile’s Gen. Augusto Pinochet (1973-1990). On Aug. 7, nearly nine years after Pinochet passed away at age 91, Contreras, 86, followed his former boss to the grave. Both men died of natural causes, and, in both cases, the deaths prompted spontaneous street celebrations. Outside the Santiago hospital where Contreras had been treated since September 2014 for kidney problems and other serious health issues, critics of the 17-year military regime poured sparkling wine and waved flags. -from NotiSur, August 28, 2015

The date of September 11th has its own infamous meaning in Chile. The US-backed coup that toppled the Allende government and launched Chile into a seventeen-year military dictatorship headed by General Pinochet occurred on September 11th, 1973, a day when the presidential palace was under violent siege and Salvador Allende allegedly committed suicide in his chambers. The years that followed were marked by grave violations of human rights committed by the Pinochet regime.

Although that period ended with the transition to democracy in 1990, the wounds have not healed into healthy scars, but remain fresh and open in so many ways. The trials of crimes against humanity, with their failings and achievements, have been a centerpiece of that public healing process. However, outside of law and government, a prominent place where this process of collective healing and construction of historical memory has taken place is within Chile’s vibrant cultural sector. Hence, El Mueso de la Memoria y los Derechos Humanos (MMDH), “Museum of Memory and Human Rights”. 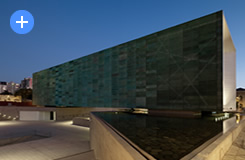 Bachelet and the Bicentennial Foundation
The MMDH was founded in 2010 as a part of the cultural initiatives carried out during the Chilean Bicentennial. Obviously, the national celebrations of Chile’s independence caused many questions of Chile’s recent past to surface anew. Then President Michelle Bachelet headed the effort herself, as she and her family had a publicly-known connection as victims of the crimes against humanity; Bachelet’s father died in detention following the coup, while she and her mother were detained, tortured and later exiled. Bachelet has reported that she was interrogated in detention by Manuel Contreras himself, in the infamous detention center Villa Grimaldi. The board of directors includes Bachelet and many academics, artists and intellectuals linked with La Concertación political movement.

Contemporary Architecture and Center of Santiago’s Cultural Eastside The MMDH is located in Santiago’s cultural heartland – the eastside. The architecture of the museum itself is contemporary and encourages a dynamic, interactive relationship between the indoors and the outdoors, and between the public and the space. MMDH not only supports artists and archives collections of important historical documents relating to the 1973-1990 period, but also hold educational initiatives, community performances and art contests to promote awareness and production of art that discusses themes of the dictatorship, such as kidnappings, detention, torture, memory and exile.

“Bad Memory”: A Musical Tribute
In 2013, the MMDH held a music contest called “Mala memoria”, or ‘bad memory’, which encouraged musicians to pay tribute to various themes of the dictatorship and of collective memory. The artist Vilú wrote her song “Gloria” in homage to Gloria Lagos Nilsson, who was kidnapped and killed in detention in 1974. Almost two years after Vilú was awarded by the MMDH for her song, Manuel Cantreras was convicted in court for Gloria’s disappearance, torture and murder. This video of the beautiful song "Gloria" was subitted to the MMDH.

Museums of Memory – A Larger Picture
MMDH was not the first such institution in Chile, although it has come to hold a certain importance especially within the arts community of Santiago. The Catholic Church’s Fundación Vicaria de la Solidaridad , Villa Grimaldi: Corporación Parque por la Paz  and la Casa de la Memoria all played a part in supporting the founding of the MMDH in 2010.  The MMDH is among five places in Santiago cited by the organization Global Voices where  one can remember the Pinochet dictatorship and say “Never Again”

Given that Chile’s history is unique, but not alone in Latin America, cultural institutions and organizations that focus on collective memory and human rights have emerged elsewhere. Such institutions exist in Argentina, Brazil, Colombia, Guatemala and elsewhere. Earlier this year we featured a piece on Paraguay’s Museo de la Corrupción any of these institutions follow in the footsteps of museums, such as the Holocaust Museum in Washington D.C., which have marked a new era of responses to state violence. In this context, we are seeing museums transforming their traditional roles in society.

Traditionally, museums were about collections and exhibition. Today, as we see with the MMDH, the museum’s societal purpose is found not just in the collections themselves, but the very act of collecting. Through this act, the community engages in archiving of their own memories. And as we see with Vilú, younger generations have a physical place to express their connection to their cultural and political past.
Posted by BreadNM Blog at 12:15 PM