Ricardo Trotti, executive director of the Inter-American Press Association/Sociedad Interamericana de Prensa since 2014, was a panelist at the "Mobile Media Culture in the Americas: The Digital Divide" conference at Florida International University in Miami on March 23, 2017. Trotti was one of four people who addressed the digital divide in many countries in Latin America and the impact of social media on traditional news coverage.

Posted by BreadNM Blog at 4:22 PM No comments:

SUNU: A Documentary Film about One of the World's Greatest Treasures

Seen through the eyes of small, midsize and large Mexican maize producers, SUNÚ knits together different stories from a threatened rural world. It journeys deep into the heart of a country where people realize their determination to stay free, to work the land and cultivate their seeds, to be true to their cultures and forms of spirituality, all in a modern world that both needs them and despises them. SUNÚ reveals how maize and everything it gives life to could be lost forever, and shares a generous tapestry of simple, heartfelt messages for the farmers of the world and the city dwellers who could lose the capability to make important choices unless they act soon. 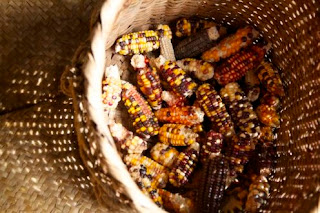 By Sabrina Hernández
On Feb. 24-26, the Student Organization for Latin American Studies (SOLAS), in conjunction with the Latin American and Iberian Institute, hosted their annual Sin Fronteras film festival. The festival, held at the Guild Cinema in Albuquerque, is a student organized free event devoted to films about and from Latin America.

This year, SOLAS was fortunate to show Sunú, and to host the director, Teresa Camou Guerrero, who answered questions after the screening. While I was unable to attend all of the films shown over the weekend, Sunú spoke to me as its agricultural and smallholder focus is very much in-line with my own research interests.

As a member of SOLAS, I arrived early to help set up and was able to meet Teresa beforehand. Visiting from her home in Mexico City, Teresa was just beginning a film screening tour that brought her to Albuquerque and Santa Fe and will eventually take her throughout California.

Sunú, which has won awards from nearly a dozen different film festivals, shows us the reality of small, middle, and large maize producers throughout Mexico as they struggle to fend off the advances of Monsanto and genetically modified maize varieties. Maize, first cultivated in Mexico at least 7,000 years ago, is more than just an economic means to survival or a source of nutritional sustenance, for the maize producers in Mexico, it represents their identity and is an intrinsic part of their cultural and spiritual practices.

Mexico has prohibited commercial planting of the genetically altered varieties that threaten to disappear thousands of years of maize traditional and cultural heritage, although there is pressure from commercial interests and multinational seed companies to allow GMO corn (SourceMex, Jan. 17, 2017). With her documentary, Camou Guerrero aims to fortify the battle against GMO corn and to present to the world what exactly is at stake. One of the largest threats faced by producers of native corn is that of contamination. The possibility of imported GMO corn contaminating native varieties was the subject of an article we posted back in 2004 – evidencing the persistence of this problem (SourceMex, Sept. 22, 2004).

Camous Guerrero, in the clip below, speaks to the motivations of contaminating native corn:

With a background in puppeteering, Teresa’s connection to the subjects treated in this film may not seem like a natural fit.  However, she explained to the audience that as an artist, she recognizes the power that the arts can lend to social movements and social issues, including the producer resistance to GMO corn in Mexico. In the clip below,

In this clip, Teresa further explains how she became involved with this subject matter.

Posted by BreadNM Blog at 3:23 PM No comments:

By Sabrina Hernández
Anti-Immigrant sentiment is present in other areas of our hemisphere besides the United States. As US President Donald Trump decries immigration from predominately Muslim countries and vows to build a border wall to defend from  immigrants from Mexico and Central America, two of South America’s two most financially prosperous and stable economies also are experiencing a growth of xenophobic expression.

In Chile and Argentina—economic powerhouses of the continent—an influx of immigrants in recent years has resulted in new anti-immigrant actions. Argentina, newly under a politically and economically conservative government, has seen a crackdown on immigrants. In fact, government officials have begun the rhetorical work of conflating immigration with crime.

Susana Malcorra, foreign minister of Argentina and a serious candidate for UN Secretary-General in last year’s election, has done her part to establish a link between immigration and drug trafficking. Led by President Mauricio Macri, Argentina’s government has developed the rhetorical framework to vilify immigrants, established new controls meant to discourage immigration, targeted bus terminals used by immigrants, and on Jan. 26, implemented a system that obligates airlines to comply with the Interior Ministry.

Not unlike Argentina, Chile, too, has proposed legislation to curb immigration. In the face of a 132% increase of legally registered foreigners, Chile’s rightist coalition, Chile Vamos, wants to make it more difficult to obtain residency visas and also impose clearer penalties for violation of immigration laws.

Policies Fuel Anti-Immigrant Sentiment
And what is the collateral damage of these legislative and discursive campaign against immigrants? Much as we have seen here in the United States, discrimination against immigrants is on the rise in both Chile and Argentina as well. While immigrants are strategically targeted for national scapegoating, one study found that immigrants in Chile on average have spent more time in school than their Chilean counterparts.

Immigrants in Argentina primarily come from Paraguay, Bolivia, and Peru, although some people are also migrating there from Uruguay and Chile.

The majority of its immigrants entering Chile hail from Peru, Argentina, Bolivia, Ecuador, and Colombia, with a recent arrivals coming the Dominican Republic, Haiti, and Venezuela (a country that finds itself in times of unprecedented inflation). As more Haitians and other immigrants of African descent arrive, an interesting result has been the diversification of the traditionally homogenous ethnic makeup of Chile.

There is uncertainty whether proposed and enacted legislation will ultimately discourage immigration into the two powerful economies at the tip of South America. Other factors could also come into play, such as the lack of job opportunities. Chile has experienced paltry economic growth in recent years, and Argentina has seen a growth in inflation, a drop in domestic consumption, and an explosive rise in the country’s poverty numbers during the Macri years. The economy was a factor in recent migration patterns in the US, In the years following the Great Recession, the number of Mexican immigrants who left the US surpassed arrivals.
Posted by BreadNM Blog at 11:29 AM No comments: