Summit of the Americas: 21 Years Later 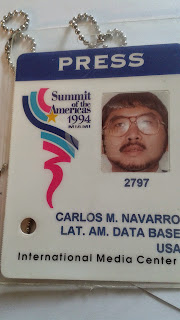 By Carlos Navarro
There were hundreds of representatives of the media present at the first-ever Summit of the Americas in Miami in November 1994. The press corps was very diverse, although the majority of those covering the event represented the big newspapers and broadcast outlets from the U.S. and Latin America. There were a few of us from smaller operations. I was there as a writer for a small university-based news service.  I remember greeting some writers from my former employer Knight-Ridder Financial News at the press tent, and a few feet away the Washington press corps was Dee Dee Meyers, the press secretary for then U.S. President Bill Clinton.

This gathering of leaders from Latin America was the vehicle for Clinton to promote his proposed Free Trade Area of the Americas (FTAA). Clinton, who had just presided over the start of the North American Free Trade Agreement (NAFTA), saw the FTAA as an opportunity to extend the newly enacted U.S.-Mexican-Canadian agreement to thre rest of the hemisphere.

The summit included organized and impromptu press conferences, as well as opportunities for officials to address the press after a session. I attended an informal conference with Clinton advisor David Gergen, as well as a formal address by Guyana's Prime Minister Cheddi Jaggan. Former Colombian President César Gaviria, who was then secretary general of the Organization of American States (OAS) also spoke to the press informally, as did Dominican President Joaquín  Balaguer.

If bringing the leaders of the hemisphere together for face-to-face meetings was the goal of the summit, then the gathering was a success. There was little discernible conflict, and one reporter from Washington described the gathering as a "lovefest."

The legacy of this first Summit of the Americans was to create the blueprint for the countries of the hemisphere to continue to come together every three years. Those gatherings have been marked by greater internal and external strife, including the emergence of organized protests against globalization and neoliberalism that were absent in Miami.  Internally, the conflict was the tension between the neoliberalism (market-opening measures) promoted broadly by the U.S. and some leaders in the hemisphere and the growing move toward more centralized socialist-oriented governments that placed a higher direct priority on trying to meet the needs of the people of the region.

"Our challenge now is to ensure that, as we implement the Plan of Action and create our first hemispheric free trade area, we put in place measures to ensure that all our peoples share equitably in the benefits,"said Guyana's former Prime Minister Cheddi Jaggan at the initial summit in Florida.

After seven summits (and one special summit in Monterrey), the theme of equity remains elusive.  This was evident in the final declaration presented by the host, Panamanian President Juan Carlos Varela Rodríguez. "The theme of the Summit, 'Prosperity with Equity,' has been at the forefront of the agenda and our discussions. We proposed the theme based on our experience and that of all the countries of the Americas. We have grown strongly, but not all the population has benefitted sufficiently from that growth," said the Panamanian president.

"As the host country we proposed a document setting out Mandates for Action that would address the various core areas that underpin Prosperity with Equity: health, education, energy, the environment, migration, security, citizen participation, and democratic governance," added Varela.

Furthermore, the countries in the hemisphere have not shown the type of unity that the founders envisioned. At these summits, the countries grouped themselves into factions: supporting or opposing the U.S. Here are links to the summits in Santiago (1998), Quebec City (2001),  Mar de la Plata, Argentina  (2005), Trinidad and Tobago (2009), and Colombia (2012).

LADB and the 2015 Summit
Our LADB writers covered the Panama summit from two perspectives. One article addressed an initiative by the three countries that comprise the Northern Triangle of Central America (Guatemala, Honduras, and El Salvador) to discuss a regional agreement to promote growth and development, including the Plan for the Alliance for Prosperity in the Northern Triangle.  El Salvador, Honduras, and Guatemala have some of the highest crime and poverty rates in the Western Hemisphere, and as a result of these conditions almost one in 10 of their citizens seek to emigrate, mostly to the US," wrote Louisa Reynolds in the the April 30 issue of NotiCen,

Despite the goal to increase regional cooperation, a lack of harmony was also evident at this year's summit. As Andrés Gaudín wrote in the May 1 issue of NotiSur, President Barack Obama had hoped that his country's newly improved relationship with Cuba would be a highlight of the regional gathering. Instead, the U.S. found itself on the defensive because of the executive order that Obama signed on March 9, in which he declared a "national emergency" because "the situation in Venezuela … constitutes an unusual and extraordinary threat to the national security and foreign policy of the United States." The president was soundly criticized even by former allies like ex-Colombian President Ernesto Samper, who is now secretary-general of the Unión de Naciones Suramericanas (UNASUR).

There was no definitive move toward equity and cooperation at the Panama summit. This means that the two issues are likely to come up again at the next summit in 2018, which is scheduled for Lima, Peru.

(Subscription required to read full LADB articles. Click here for subscription information)
Posted by BreadNM Blog at 10:04 AM No comments: