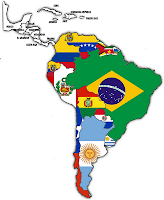 In recent weeks, events throughout South America have pushed indigenous issues back to the regional forefront. In Brazil, indigenous groups demonstrated in defense of the country’s 1988 Constitution--which guarantees many of their rights--as a way to challenge large multinational companies that promote the use of genetically modified seeds. In Chile, ethnic Mapuches, the country’s largest indigenous group, are again challenging the conservative government of President Sebastián Piñera, demanding that the country’s anti-terrorism law--used to subject indigenous people to discriminatory legal procedures be scrapped. In Bolivia and Ecuador, indigenous groups have begun challenging the "friendly" governments of Presidents Morales and Correa. And in the Venezuelan capital of Caracas, member states of the Southern Cone Common Market (MERCOSUR) recently sat down with indigenous organizations to analyze an anti-discrimination initiative put forth by Venezuela. -Andrés Gaudín  Read More

The Salvadoran Catholic Church has shuttered one of the country’s key human rights institutions, the Tutela Legal del Arzobispado, a legal aid office that operated for more than 35 years and collected a huge cache of documents regarding rights violations committed before, during, and after the country’s 1980-1992 civil war. The closure went into effect on Sept. 30, much to the chagrin of Tutela Legal’s approximately dozen employees, who say they were blindsided by the decision. Tutela Legal--known originally as Socorro Jurídico--was founded in 1977 by Archbishop Óscar Romero. The man who currently heads the archdiocese, Archbishop José Luis Escobar Alas, offered little in the way of explanation for the shutdown other than to say, via a written statement, that the institution’s work was "no longer relevant." -Benjamin Witte-Lebhar  Read More

A bill that would legalize non-marital civil unions for same-sex couples has split Peruvians into two camps: those viewing such unions a civil rights issue and others who say it is an attack on the family. Congressman Carlos Bruce, leader of the Concertación Parlamentaria bloc, presented a bill Sept. 12 to establish a legal institution of non-marital civil unions between same-sex couples in recognition of gay and lesbian civil rights and end existing discrimination against that sector of the population. But Lima’s Archbishop Juan Luis Cardinal Cipriani rejected the proposed law. "I do not agree; I don’t believe the people want it. I don’t believe it represents the majority nor do I think that it excludes anyone," he said in his weekly radio program. -Elsa Chanduví Jaña  Read More

Critics hammered President Enrique Peña Nieto for an overly timid reaction to a report that the US National Security Agency (NSA) spied on him by intercepting his emails and cellular phone communications while he was still a candidate for president (SourceMex, Sept. 11, 2013). Now, new allegations have surfaced in a German magazine that the US was engaged in a massive spying campaign during ex-President Felipe Calderón’s administration (2006-2012), prompting the Peña Nieto government to talk tough again but not take any direct action against the northern neighbor. "This practice is unacceptable, illegitimate and contrary to Mexican law and international law," the Secretaría de Relaciones Exteriores (SRE) said in a statement. "In a relationship of neighbors and partners, there is no room for the kind of activities that allegedly took place." -Carlos Navarro Read More

On Oct. 20, the Chamber of Deputies approved a tax-reform plan that includes most of the controversial provisions that President Enrique Peña Nieto proposed. While the Mexican Congress debated the merits of tax reform, a discussion was also underway on whether the country is in the midst of an economic recession. Mexico’s GDP is expected to grow only about 1% in 2013, a stark contrast to earlier estimates that projected an expansion of close to 4% for the year. As has been the case, Mexico’s economic fortunes have been connected to those in the US, and the uncertainty created by recent developments in the US Congress—including the recent two-week shutdown of government operations—has had a direct impact on Mexico. -Carlos Navarro    Read More

At the end of May, the Dominican government decided to "reinforce" border security with 1,500 extra troops. This is far from being a recent event, as for years both countries have engaged in joint security operations. Minister of Defense Maj. Gen. Rubén Darío Paulino Sen told the local media that the troops sent to the border would be trained to prevent all sorts of crimes in the border area. This occurred amid a series of media stories regarding the "unchecked flow of illegal immigrants," particularly women and children, across the Dajabón border-crossing point. -Crosby Girón  Read More
Posted by Unknown at 3:51 PM